With the function Handicaps/Print…/Handicap Year Results you can print a rounds statistic of your members (based on the handicap record sheet).

You will get the number of rounds a player has played, split into rounds played on the own course and on other courses, reductions, transfer in the buffer and handicap confirmations. 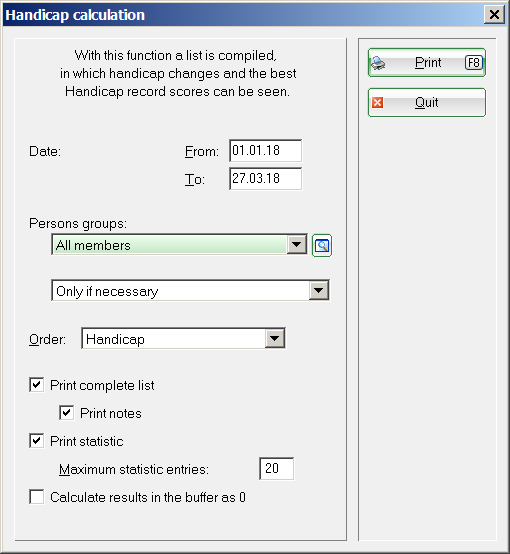 Enter all the data according to you wishes and print the list by pressing Print (F8):

Here is an example of rounds statistic (in German)

The following explains the most important columns:

This feature also allows you to determine the 10 players that have increased their handicap the most in the last year. With the special function Player of the year you can enter more detailed options.

With the List or participants you have the additional option to set the number of internally played tournaments for all members.

As often supported by PC CADDIE, you can narrow down the result of the rounds statistic by using the group of persons (seniors, ladies, men, etc.). Having set all options, the rounds statistic will be printed before the statistic, so that you can see the number of tournaments and handicap changes for each player.

If you only want the statistic, deactivate the Print complete list option.

If you uncheck the Calculate results in the buffer as 0, the results from buffer zones will be calculated in the column 0. This will allow you to get a list with the exact amount of handicap lowerings (without buffer results).