You can enter all types of results for match play and transfer them to the Intranet!

In match play, the players play individually (or in pairs in the case of foursome match play games) against each other. Generally, the results only show who has won or lost a hole, or if the hole ended as a draw.

There are 2 variants for the distribution of handicap strokes:

Set the match type to “Singles” and the “Scoring system” to match play in the basic tournament settings. It is very often calculated with a HCP factor of 3/4. Read your description! 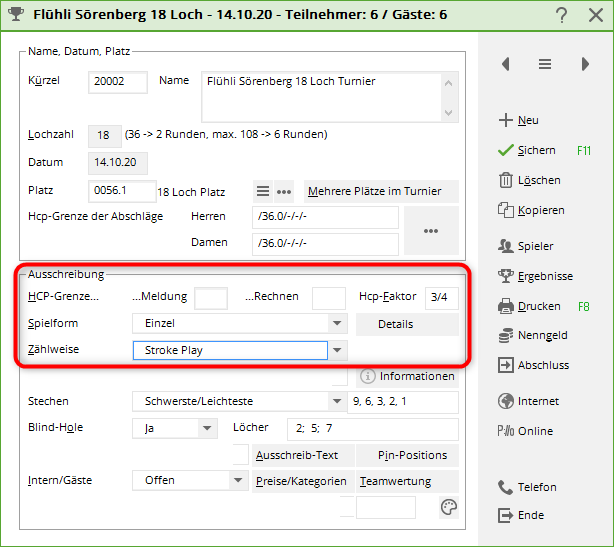 Click on “Details” on the right of the “Playing form” to see the settings for the distribution of the default strokes or to change them if necessary. Read more about this:Stroke distribution on the scorecard. 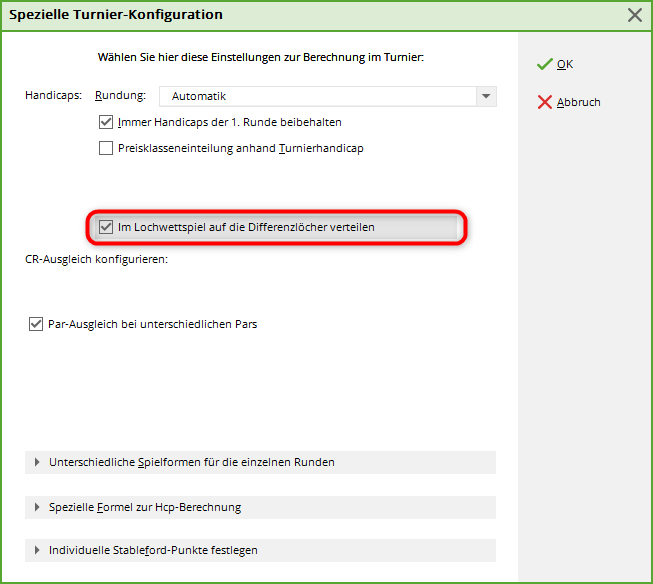 Create a starting list as usual by only putting the two players who have to play against each other in a 2nd game. 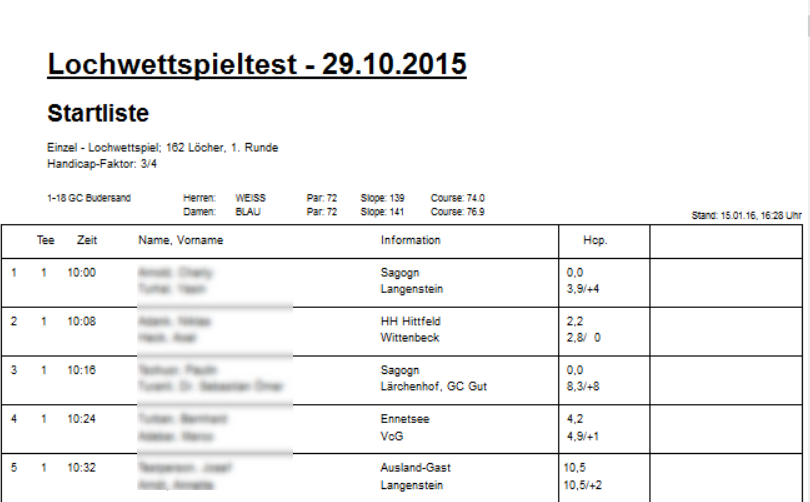 In the following screenshot, we are showing you a printed score card that is for both players, the weaker player receives 3/4 of the difference between both players' handicaps on the holes beginning with the handicap 1: According to the DGV, the handicap shots are better given on the holes (= difference holes), whose handicap distribution key lies between the handicap of the better player and that of the weaker player. This is fairer for a match play.
Meaning: Since the game is played against each other, all the strokes that both players would get if the game was fully played (or 3/4) are removed. All that remains is the lines on the so-called “difference holes”; the holes at which only the weaker player (with full or 3/4 handicap) would get additional strokes.

With the 3/4 handicap factor:
First, the difference between the players' full handicaps is determined, then 3/4 of that number is calculated and rounded up, then you see what the better player's handicap is with the 3/4 HCP factor (in our example, the handicap would be 17), therefore, the handicap strokes begin with 18 on the score card, then 1, 2, 3, and 4.

There are several ways to enter results, and you can mix these ways within a tournament depending on how the players have filled the match play score card in!
You will see the respective match play opponents in the entry on the display. Go to “Hole results” and enter as follows: With this variant, the opponent's results are also filled in at the same time, if you have entered a +, the opponent gets a minus for the same hole (only one player can win the hole

)
You also see the opponent's result in the par column, and you can see the partner's handicap for the particular hole in the “W” column (if it's presented as a +, the opponent is about to take a shot): 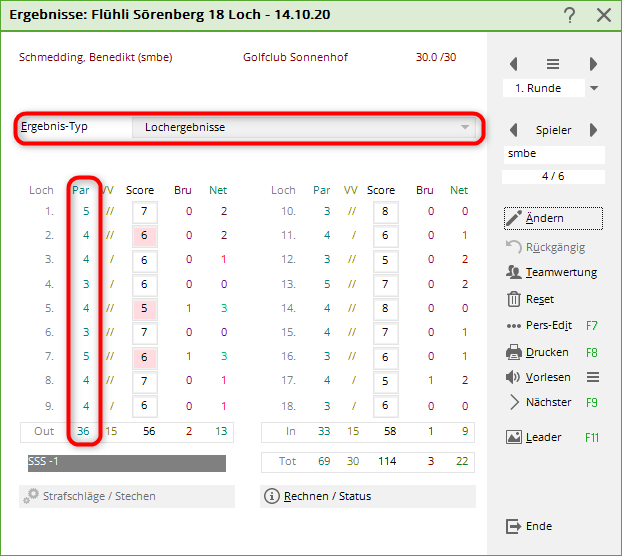 The printed results list lists the pairs, the winner is always printed a bit bolder and is above the opponent. There are no results listed for the loser (this is necessary, if the winner won by 4, the loser's 4 down result does not need to be emphasized). 4&2 here means that the player won by 4 and the last two holes weren't played, therefore this result is “higher quality” and comes before the other 4 up results (depending on the entry, you would otherwise have to enter a playoff result).

You can also assign teams and print the Team scores at any time. In our case, Team 1 has 2.5 points, as does Team 2, the teams have played to a draw. Each team won twice, lost twice, and drew once. In the following screenshot, we print the team scores. 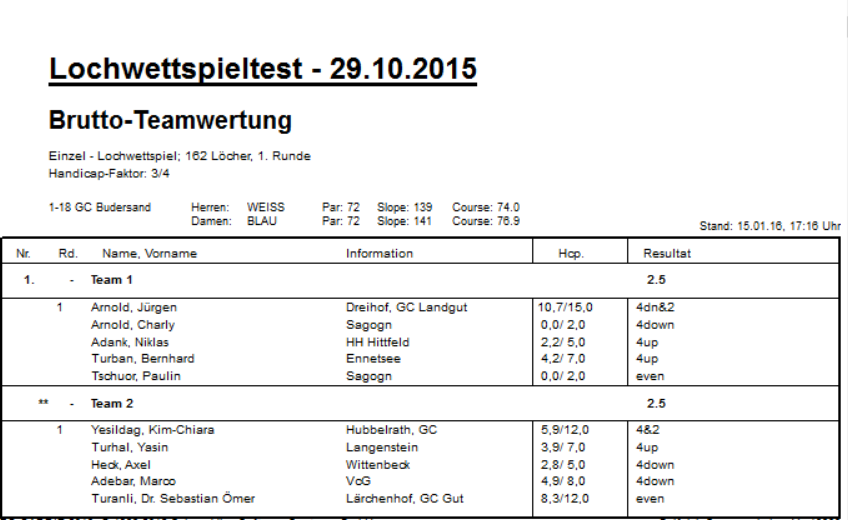 Customers who work with the PCCADDIE:://Online Tournament management can put Match play results online as a tree view (further tips for tree creation can be found after the screenshot):

Example of the final tree The menu item “Matchplay” in the tournament calendar can be activated on request. To do this, please contact the PC CADDIE online support at support@pccaddie-online.de.

When the results list is published, the tournament is displayed under “Matchplay”. After you enter the results, you have to update the tournament ONLINE every time (Internet + Okay). Please note that the “Matchplay result display” must also be activated under Internet. Create a tournament with the appropriate number of holes: for 16 players: 72 holes for 4 rounds; for 32 players: 90 holes for 5 rounds, etc. Set the game form to SINGLE and the counting mode to HOLE COMPETITION
In the date field, enter either the start date of the round or the date on which all pairs must have played (just as your players are used to).

Create a start list with start times in batches of two. This is important so that the tree can be created on your homepage.
You can also use it to print a scorecard for the players. The players can still make individual arrangements for the game (as is usual with the annual match play).

If you want to send players SMS about pairings, be creative. It makes little sense to turn off the information on the (provisional) start time, because the next match play may be CLUB against CLUB, and you need the start time in the SMS.
If you keep the text short (the example is almost too long, because the names of the two players in the pairing should still be given), it may look like this:

Enter results for the 1st round

Read: Entering results
Each time you enter results, make sure you transfer the competition to your homepage again, so that the tree fills up bit by bit.

Start the next rounds The evaluation is not supported for match play with 2 individual results per pair or players! Here you can only print scorecards!!! This refers to the four-ball (and the aggregate).

Classic foursome, foursome selection drive and Capman foursome can be evaluated as a match play, since there is only 1 result for each pairing!!