The introduction of the WHS (World Handicap System) causes some changes to the calculation of the game handicap for different game forms! Please pay particular attention to the information on 2-way scramble and scramble (the formula for scramble must be actively selected in the formula selection for every competition!)

Here you can find the DGV Service Portal and the information about the WHS:
https://serviceportal.dgv-intranet.de/regularien/vorgabensystem/world-handicap-system.cfm

we do not yet have any detailed information (as of October 21, 2020) for Switzerland and Austria

Germany
Only HCPI-relevant competitions are permitted on the DGV intranet and also accepted with the results during the season (May to September). This is controlled by checking the HCPI relevance.
Exceptions must be clarified by the club with the DGV. Both HCPI-relevant and NOT HCPI-relevant games can be played outside the specified season (October to April).

When you send a competition to the intranet, the setting for HCPI relevance is automatically checked by the DGV and a response is sent, which you can then see in the information window:

You can read about this here.

A penalty score is added to a player's master sheet, this is determined by the captain.

Please read the “Handicap rules, valid from 2021, licensed for the DGV”.
A short email to handicap@dgv.golf.de sent by the club (captain) is enough for sending the request tp DGV.

The mostly used formula for the calculation of the playing handicaps is:

In some tournaments the playing handicap is also influenced by the fields “HCP limit …Calculation” or “Hcp factor”. The “HCP limit” is setting the upper limit of the handicap, i.e., a golfer's handicap can be at most as high as the value entered here. You can use this handicap limitation in every handicap qualifying tournament, given that PC CADDIE will transfer the correct Stableford points into the handicap record sheet based on the correct exact handicap.

The “Hcp factor” will be calculated from the playing handicap. For example: if you enter „3/4“, a golfer with a normal handicap of 20 will participate in the tournament with a handicap of 14. A tournament like this will never be handicap qualifying.

The course rating table is also calculated Course Rating Table according to this example.

In a bogey competition the golfers are playing against the par of the golf course. The golfer is getting the number of handicap strokes according to his playing handicap.

The result is calculated as a +, 0, or - per hole. At the end, the pluses and minuses will be added up. This playing format can also be played as a handicap qualifying tournament. PC CADDIE is automatically calculating the Stableford points.
Rad more in our practical example: Bogey-Competition.

The Stableford points will not be calculated hole by hole, but rather by adding 36 to the total result. This means, a total result of +2 (= „2 up“) will result in 38 Stableford points. This is important because bogey-competitions are played strategically different, and the player may pick up his ball earlier than in a normal Stableford competition.
(see also the DGV handicap and game rules, Page 69 - As of: 2012-2015)

The field Entry is used for single tournaments.

The field HCP limit… … Calculation is limiting the exact handicaps of the players in the various four-ball tournaments, as follows:

Explanation: The mostly used limits for both handicaps are 48 or 56 as a maximum for the combined exact handicap (the sum of the handicaps). The Hcp limit…Calculation 54 for a single play is not necessary, as it is anyway not possible to calculate more than 54. If a pair of golfer exceeds this limit, both of them will be considered with proportionally lower handicap.

The calculation of the common HANDICAP is ALWAYS done based on the individual players' tees
For four-balls, however, one should consider whether every detail setting makes sense, since there is anyway only 1 result per pair.

The following should be considered when calculating the scores and the end results for pairs with different tees:

Aggregate is a playing format with a team of two golfers, where each player is playing his own ball.
The normal playing handicap is calculated per team player, per round.
The results of both players will we added.
This playing format is possible as a Stableford, stroke play or as a bogey competition.
(DGV handicap and game rules 3.3, Page 188 - As of: 2012-2015)

Both players tee off and choose the better ball for the second shot and continue like in a foursome. If none of the balls can be played (for example both are “Out of bounds” or lost), the choice regarding from where to continue the game is governed by the rules applied to the respective game. The alternate playing of the same ball needs to be respected in any case.

The game begins the same way as the greensome, then each golfer plays the other's ball for the second shots. The best of the second shots is selected, and from there the two partners play alternate shot into the hole.

In Germany and Austria, the playing handicap is calculated according to the normal foursome: Half of the total playing handicaps of both players.
(See DGV handicap and game rules 3.3, Page 187 - As of: 2012-2015)

In Switzerland, the playing handicap is calculated according to the normal greensome: 0,6 of the lower playing handicap and 0,4 of the higher handicap. Both figures are added up before rounding.

In a four-ball, both golfers are playing their own ball. The score will be the best obtained by one of the players for each hole. There are no penalties if only one of the golfers plays a hole.
The marker needs to write down the score of the player with the best score per hole. Writing down the best result must include information regarding which golfer achieved that result, otherwise the team will be disqualified.

The conventional stroke tournaments (Stableford) are actually “four-balls”. It is often called “Four-ball/better ball” because the best ball is the only one that actually matters for the result. Also with the WHS, the DGV recommends the use of the factor 9/10 for the determination of individual game specifications of the partners, which PC CADDIE uses by default, if nothing else has been set. However, the factor may be set individually depending on the competition announcement and stored in the Hcp factor field in PC CADDIE.

It is important, that each player is writing down their own result per hole on the scorecards. This will be entered in PC CADDIE . Therefore PC CADDIE is calculating the best score per hole for the teams (considering two different handicaps of the two players). It may happen that one golfer's result is the best one for a hole in a net results list, while other golfer's result is the best in a gross results list, for the same hole.
You may leave the holes with no scores empty (no stroke), especially in a stroke tournaments. Thus PC CADDIE can check if there is at least one result per hole.

The Ryesome foursome in Austria is the same form of play as the Scramble with 2 players in Germany.

New formula can be selected from the selection of formulas recommended with WHS from 2021! Please continue reading!!

Scramble is usually played in teams of 3 or 4!

A scramble is a team playing format, where the flight is building a team. All players of the team are teeing off and then deciding for the best ball. From this position, each player is again playing his own ball. There is just one result per hole and per team, independent whether there are 3 players or 4 players.
In Texas Scramble each golfer plays again from the best ball position; in a Florida Scramble, the person with the best position does not play the next shot.

The following formula is recommended with the WHS - World Handicap System; this is available when selecting the formula (under 2.):
25% / 20% /15% / 10% from the lower to the higher course handicap

The calculation of the scramble, where no other specifications are made, is:

But the calculation can be also made based on a previously entered formula. Please note that you cannot use commas when entering the formulas. For numbers like, for example, 0,4, please enter 0.4.
By clicking the button HCP-Berechnung in the tournament window and then the button Select you will find various default formulas: 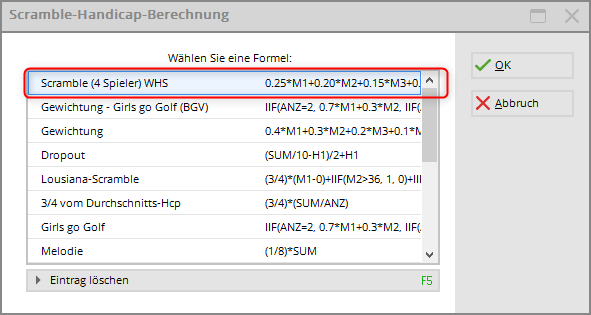 You can also create a new formula which will be used for future tournaments. After creating a new formula PC CADDIE automatically asks you to provide a name for it. 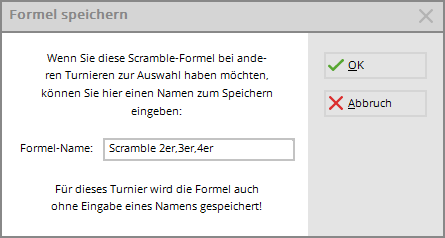 From now on this new formula is always available. 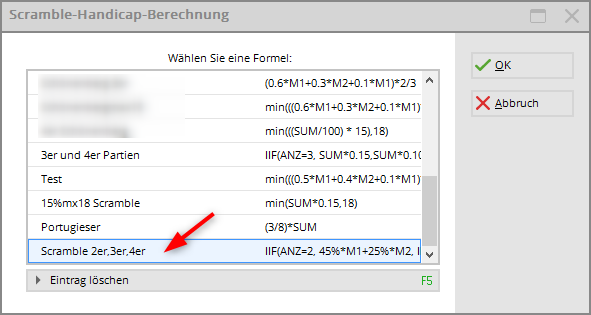 Scramble with 3 or 4 players

TIPP: the “Girls go Golf” formula can also be adjusted for this and saved under a new name! There is no automatic adjustment for the WHS !!

Despite the name, this long formula has nothing to do with girls, but it was originally only programmed for games played by girls.
The formula ensures that the players' HCPs are weighted differently for different flight sizes:

If the game consists of only 2 players (unusual for scramble, but it could happen if one does not appear in a game of 3), then the better HCP (M1) is weighted with 70%, the 2nd player (M2) with 30%.
If there is no flight of two in the game, this part of the formula has no effect.

If the flight consists of 3 players (with scramble you rarely make it all the same size), then the better HCP (M1) is weighted with 50%, the second best HCP (M2) is weighted with 30%, and the 3rd player (M3) with 20%.
If there is no flight of three in the competition, this part of the formula has no effect.

A team score is usually used for these playing formats, but it is also possible to have single results. The tournament is usually played a a single, each player having his own score. There are various possibilities for calculating the Team score, which can be accessed by clicking on the Wizard button.

Each player is getting a piece of string according to his handicap. To improve the lie of a ball (without adding a stroke), the player strings it out in the direction he wants to move the ball. If the string reaches the point where the player wants to place his ball, he can move it and cut the corresponding length from the string. The player has to finish the round as usual when there is no string left.

Course Handicap (Playing Hcp) in tournaments over less than 18 holes

This is the same with fun tournaments or cross country tournaments:
Is there a tournament over 12 holes, the deduction is 12/18th of the normal playing handicap (for our example with the handicap 26, this means 17,33 ⇒ 17. 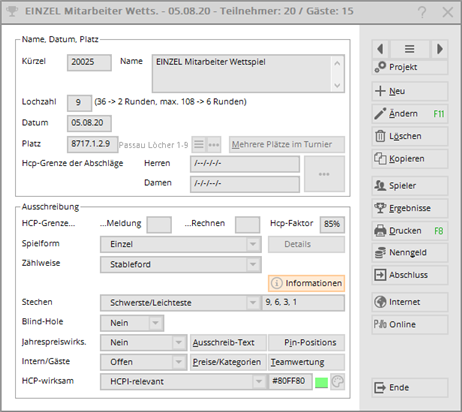 Events are also supported by the DGV intranet. The following setting options are available: 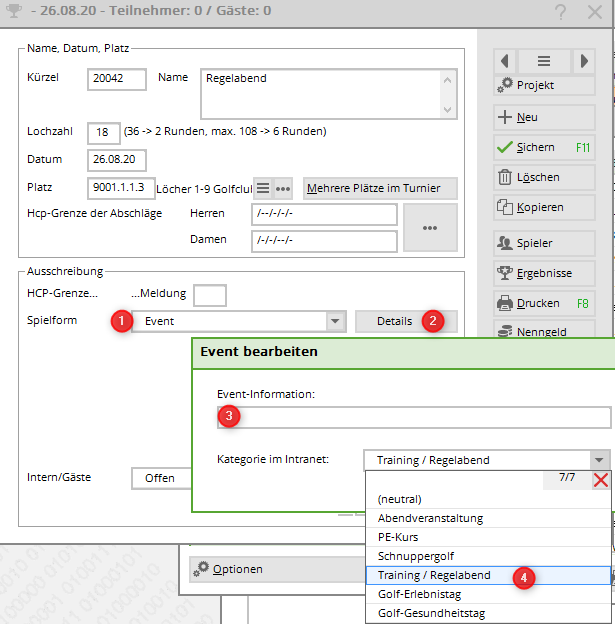